Yesterday, Saturday, Nov. 3, I ran my first-ever half-marathon. Depending on the mile, I both loved and loathed it, but I’m overall really proud of myself for finishing.

A quick breakdown + some highlights.

The course started in downtown Indy, and during the first few miles, we were running straight into the sunrise – a gorgeous way to see Circle City. (Note: I was too anxious to take pictures before the race – and, you know, slightly occupied during it – so please forgive the lack of photographic evidence.)

Around mile four, I finally caught a glimpse of my entourage.

I continued having a great time through mile six.

Mile seven kind of sucked. But then eight and nine got good again – lots of bands along the route, great costumes (i.e. man in head-to-toe bodysuit that resembled the human muscular system, giant jellyfish on stilts in front of the Children’s Museum) and more funny signs…

But then the farting began.

Not from me, swear. Swear.

Okay, I get it – running is one huge laxative (sorry, ye of weak stomachs – it’s just a scientific fact. Look it up.), and 13.1 (or more) miles is no small feat. Especially when it comes to your digestive system.

But right around those later miles, at the point where I probably could have been talked into stopping, I kept ending up right behind someone who had to let a few (super smelly ones) fly.

And it was right in those moments that I didn’t have even the slightest amount of extra energy to get around those freely farting, so I had to just keep trudging along behind them, gasping for clean air amid the (horrible, horrible) stench.

Anyway, I somehow found some oxygen to keep going. Mile ten was a definite challenge, and number eleven last for-e-ver. But then we came back into the city for mile twelve, and the crowds thickened, groups were dancing on the sidewalk and people were yelling encouraging things like “You’re almost there,” which was honestly the best thing I’d heard all day.

And then I crossed the finish line, which was one of the best moments I’ve ever experienced. The end of the race kind of snuck up on me – I rounded the final curve, and all of a sudden it was there – but I finished strong and happy.

And pretty much right after I finished, it started sleeting. I felt bad for the other people still going but was so glad it held off long enough for me to cross the finish line.

And despite the fact that my leg muscles hurt more today than I think they ever have in my entire life, I’m still feeling pretty good about it.

After the race (and once I had time to take a nice, looooong shower), Daddy, Boyfriend and I headed over the Union Jack’s for some cider and lunch.

Then, we all took a three-hour nap, which was pretty freakin’ fantastic.

That night, we met up with friends Kyle and Michelle for some dinner and shuffleboard. 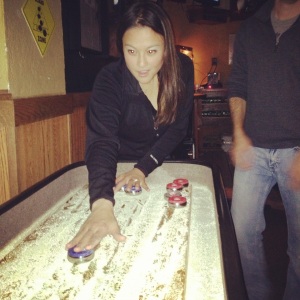 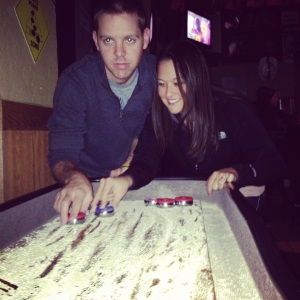 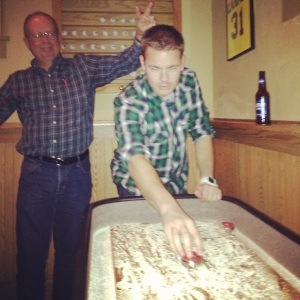 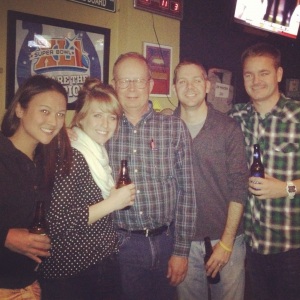 In all, it was a pretty stellar weekend, and a pretty amazing experience overall. And I couldn’t have done it alone – so let’s pause for a quick moment for my acceptance speech, shall we?

– Mama, for the pre-race card, Half-Marathon Training for Women book and other general ways of encouragement.

– Big Sister, for talking me through pre-race jitters and reminding me I could do it.

– Mrs. Packard, for the emails, tweets, articles and Facebook posts, giving me encouragement and letting me vent.

– Mrs. Sieb, for pushing me to register in the first place.

– Jessica, for meeting me at the finish line.

– Daddy, for making last-minute plans to come watch me race (and bringing a bottle of rum chatta for recovery – yum!).

– Erik, for standing out in the cold and cheering me on with funny signs I didn’t understand.

– Mike, for cheering me on, fitting me for shoes and letting me ask him a gazillion questions about running and racing.

– My co-workers, Twitter network, friends and family that encouraged me all along the way.

And, most of all,

– Boyfriend, for keeping his rumbling stomach at bay until we could go to breakfast after my long runs, for taking me to get fitted for shoes, for putting up with my workout schedule, for fetching me ice packs and ibuprofen, for foot massages, for getting up when it’s still dark out, for every other morsel of support imaginable.

I love and appreciate you all so much! Time to plan my 2013 race schedule!